Rocking thru the years 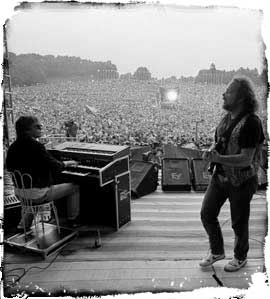 1978 – The band was formed in gothenburg on the Swedish west coast by Clas Yngström – guitar/vocals, Uffe Åhman – drums and Hans Olausson – bass. The songlist then was mainly built on Jimi Hendrix covers, thus also the name of the band which was taken from a Jimi bootleg.

1980 – first album “Sky High”, produced and released by the band – 9 original songs and one Hendrix cover, “I Don´t Live Today”, all featuring lyrics in swedish. The band was a big success at a Jimi Hendrix Memorial fest in Amsterdam, Holland. After Sky High´s set Clas and bass player Börje Olevald jammed with Experience drummer Mitch Mitchell.

1985 – band signs with danish Mega Rock label and releases album # 3 – “Freezin´ Hot” – which became a big seller throughout Europe, much due to the cool rock video for the single
“I Ain´t Beggin´”. Sky High were able to make the video much thanks to their connection with ZZ-Top and their publishing company. “I Ain´t Beggin” is to this day one of the groups biggest hits. 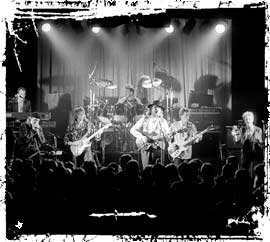 1987 – Sky High becomes a quintet with the addition of a female vocalist and keyboards. The new album –“Humanizer” – is the bands biggest commercial success. Single “Don´t Move” made it to number six in the national top selling single list.

1988 – Big festival year! Glasnost Rock in Estonia, where Sky High headlined together with P.I.L., Big Country and finnish Leningrad Cowboys, drew a crowd of over 300.000 people! The band were also invited to the New-Orleans Jazz & Heritage Jazz Fest in New-Orleans by no one less than Chuck Berry, for whom they´d opened during a number of gigs the previous summer.

1989 – “Have Guitar, Will Travel”, album no 5, was recorded in San Fransisco by a very special lineup featuring: Prairie Prince – drums, Ross Valory – bass and Norton Buffalo – harp. The band did a tour of sweden under the name “Sky High Special Project”.

1991 – back to bassics with “Safe Sex” a live album again featuring the original trio-format.
The band play music and music media conference “South By Southwest” (“SXSW”) and brings down the house at Austins legendary “Steamboat” club.

1992 – A tour to India! Sky High got an invitation from the official Indian Culture Counsil and played a three week tour all over the indian continent. The tour was well documented and was later shown on national TV in Sweden.

1994 – “Fuzzface” new album release gets top reviews in the big papers – tours, tours, tours!! One goes to Ecuador where the band meets with the national band “Los Chigualeros”.
Together they perform both with one separate set and a finale where the two bands fuse their different music´s to special mix of blues-rock and latino grooves, not unlike the style of f.ex. Santana. The two bands conclude with a tour of Sweden the following summer.

1999 – “Bluester” is the new disc ( Sky High´s 10´th ), Clas also writes for trax for swedish blockbuster movie “The Hunters”( Jägarna ). Back in the US Sky High play the LMNOP ( Louisiana music, New-orleans Pride ) festival in New-Orleans.

2001 – Tour of Japan and second time around at SXSW in Austin, TX. The band share bill with Delbert mc Clinton, Marsha Ball and Eric Johnson. At the same gig the band meets with the editor of Blueswax e-zine (www.blueswax.com) who features a Sky High-special festuring an interview with Clas Y. Later that year.

2002 – “Freedom” a new album featuring re-recorded takes on some of the bands original material together with a couple of Hendrix-trax is released on US label Grooveyard Records.

2003 – now signed to Virgin Records, the band releases it´s 12´th album “On The Cover/25 Years Of Madness” a double set featuring one disc with sky high-ified coverversions of songs by the Pet Shop Boys!!, Prince, John Fogerty, Eurythmics and more. The other cd offers a re-mastered “greatest hits”- collection. 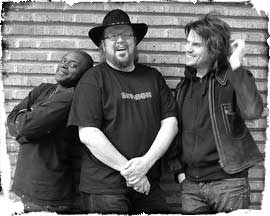 2006 – Support Sting at Sthlm Jazz Festival (the bands 10´th appearance at this fest!) Clas is presented the blues price at Åmåls Blues Fest.